“May all beings everywhere be happy and free, and may the thoughts,
words, and actions of my own life contribute in some way to
that happiness and to that freedom for all.” 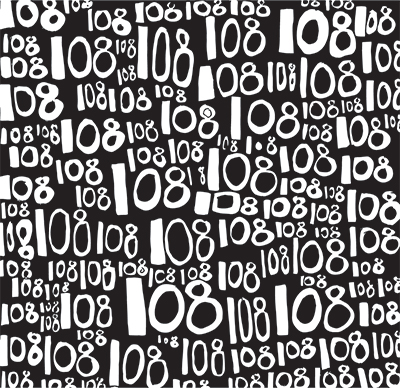 In the wake of the attacks of September 11th, Project 108 was created as a peaceful demonstration to protest what seemed like an inevitable war in Iraq. The idea was to unite yoga practitioners with a sincere wish in their hearts to advocate for peace. That year nearly 75 people joined together in Himmel Park, Tucson to practice 108 sun salutations in support of this cause.

Yoga philosophy is based upon an attitude of infinite giving and compassion, or seva. Seva is a way of life that connects us to others by dissolving the barriers of selfishness that prevent us from seeing that our own happiness is intimately and integrally related to the happiness of others. Based on this attitude, Project 108 aims to draw yoga practitioners and studios together in a cooperative effort aimed at providing financial support to the worthy causes that move our hearts.

Rosaries, or malas, are used to keep a sacred count of prayers in many religions and cultures around the world. Often prayers are done in multiples of 108 as it is viewed as the most sacred of all numbers. Examples of its’ spiritual significance include it being the Vedic symbol for the wholeness of existence, there are said to be 108 sacred sites in the world, there are 108 Upanishads or sacred texts of India, and 108 healing or Marma points on the body.

As we string together prayers on a rosary, or the rhythmic movements of our bodies in the group sun salutations, the many become one in a communal force that gives us strength in our combined efforts in relieving suffering and giving hope. Every year this event is always completely joyous. I INVITE YOU TO PARTICIPATE AND SHARE THIS INCREDIBLE GOOD KARMA FEELIN’ 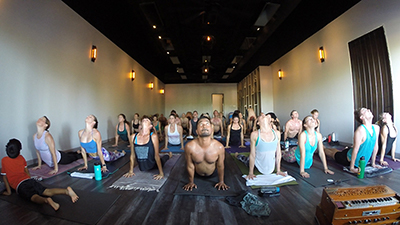 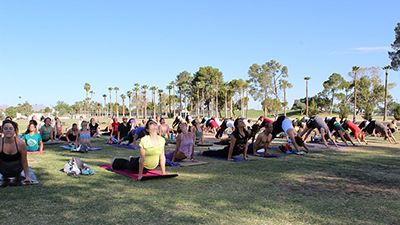 Over the past 14 years, Project 108 has supported many incredible causes including projects that support sexually abused women in the Congo, child victims of war in Iraq and the USA, earthquake survivors in Haiti, and victims of human sex trafficking in India. Project 108 compliments these international efforts with local initiatives that meet the needs of our immediate communities.

This year, we will be donating all funds to Father Gregory Boyle’s Homeboy Industries, a Los Angeles based organization that is the largest gang intervention, rehab and re-entry program in the world.

Father Gregory Boyle witnessed the devastating impact of gang violence on his community during the so-called “decade of death”, that began in the late ’80’s and peaked at 10,000 gang-related killings in 1992.

I sincerely request your assistance on this special day of September 21, 2019
to help relieve suffering and bring more ease and joy to our world.
GO TO WELCOME PAGE!

“I’ve decided to stick with love, hate’s too heavy of a burden to bear.”   ~Dr. Martin Luther King, Jr.

“If we just look away from violence without so much as sending a blessing out, the path of unkindness remains unobstructed.However, by raising awareness, sending light and love, and also by actively and vocally being a part of change, the patterns of violence can be shifted.”  ~Author Unknown